Over the past few years, Honda has introduced dozens of new powersports products. And this latest introduction of 2015 models keeps that momentum rolling with the addition of a new sport bike, significant updates to the CRF450R and CRF250R motocross machines, and the return of popular off-road products.

“We’re unveiling some exciting new models along with returning favorites,” said Lee Edmunds, Manager of Motorcycle Marketing Communications. “Our motocross bikes incorporate more race-proven technology for added performance, and the new CBR300R is a fun and affordable option for street riders. We’re also rolling out the CRF150R/CRF150R-Expert, CRF230F, CRF150F and CRF125F/CRF125F Big Wheel that have proven to be so popular over the years, plus the unique Rincon for ATV enthusiasts.” 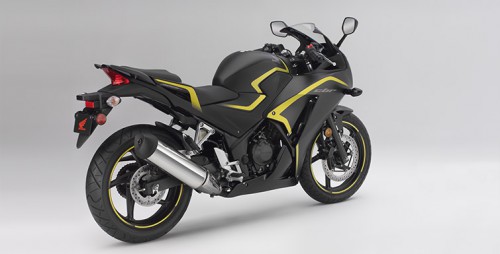 CRF250R
In 2014, the Honda CRF250R earned another AMA 250 Supercross championship. Equally important, the CRF250R stood out as the ride of choice for Pro Supercross racers. An impressive 48 percent of all competitors in the 250 class rode Honda’s CRF250R in 2014. With a great powerband and nimble handling, the CRF250R strikes a unique balance that makes it fun to ride for both professional racers and weekend warriors alike. For 2015, the CRF250R offers a host of improvements, with a new-generation 49mm Showa Separate Function Fork, Triple Air Chamber (SFF-Air) air fork leading the way. This fork eliminates steel springs for less weight (2.8 pounds lighter) while offering a wider range of adjustments than a conventional spring fork. A redesigned muffler and new fuel map settings for the Dual-Timing PGM-FI fuel injection system increase engine performance for smoother acceleration, improved throttle response, quicker revving and more peak power. Like the CRF450R, the CRF250R also incorporates Honda’s new Engine Mode Select button that allows the rider to easily select one of three different EFI/ignition maps to match track/riding conditions. The CRF250R also features new front/rear wave-style rotors, a larger 260mm front disc brake and new graphics for a fresh look. Color: Red; Price: $7599; Availability: August 2014 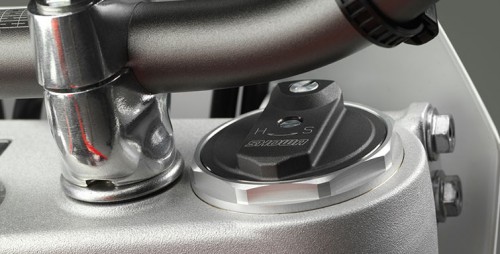 CRF150R/CRF150RB-Expert
Honda’s CRF150R and CRF150RB-Expert are designed for serious amateur racers. This potent full-on race bike offers a high-output 149cc liquid-cooled four-valve four-stroke engine with exceptional torque and rideability throughout the powerband. There’s plenty of race-tuned suspension travel front and rear in this championship-winning chassis. For years, the CRF150R and CRF150RB have racked up championships at the highest levels of amateur racing all around the country. That makes it the proven choice for competitors who are ready to take their racing up to the next level. Color: Red; Price: TBD; Availability: September 2014

CRF230F
The CRF230F stands at the top of Honda’s family of fun off-road bikes. Adult riders love its well-rounded overall performance, and it’s a great step up the CRF-F family staircase for young riders as well. The ease of electric starting and its easy-to-handle size make the CRF230F a great match for fun and off-road adventure. The motorcycle press has praised this mid-sized off-road machine for its versatile qualities that make it a favorite among off-road riders. And new styling for 2015 makes the resemblance to the CRF250R and CRF450R race bikes stronger than ever. Color: Red; Price: TBD; Availability: August 2014 (Photo not available at this time)

CRF150F
For many beginning riders, the CRF150F is the bike that’s just right—not too big, and not too small. Its moderate chassis dimensions, easy-to-handle weight, accommodating four-stroke power, electric starter and more rider-friendly features make the CRF150F a terrific match for riders entering, exploring or simply enjoying the world of off-road adventure. For 2015, CRF150F owners will enjoy even stronger ties to Honda’s flagship CRF250R and CRF450R race bikes thanks to new styling. Color: Red; Price: TBD; Availability: August 2014 (Photo not available at this time)

CRF125F/CRF125F Big Wheel
Designed for rider-friendly operation, the CRF125F and CR125F Big Wheel feature different wheel sizes to accommodate riders of varying size and skill level. With a seat height of 28.9 inches, the CRF125F places riders two inches closer to the ground than the Big Wheel, which caters to riders with a longer inseam. Both bikes feature a four-speed, electric-start 124.9cc single-cylinder SOHC four-stroke engine with loads of low-end grunt plus plenty of pull throughout the powerband. The chassis incorporates quality suspension and brake components front and rear, and both bikes are styled after Honda’s CRF® motocross machines. Color: Red; Price: TBD; Availability: August 2014 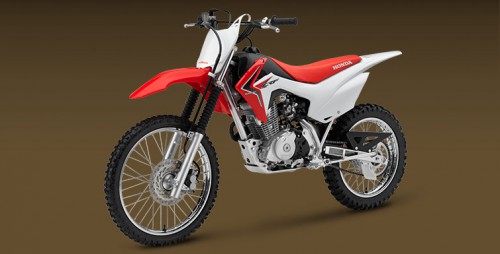 Rincon
Nothing else on the market is quite like the FourTrax® Rincon®, which is no surprise since it incorporates some of Honda’s most innovative technology. This luxury-class ATV features a powerful 675cc engine, independent front and rear suspension, electronic fuel injection, automotive-style Honda automatic transmission that features a hydraulic torque converter, along with front and rear disc brakes and more. All these features come together in a fun-time package to place the Rincon in a class of one. Colors: Olive, Red and new Honda Phantom Camo®; Price: TBD; Availability: Summer 2014 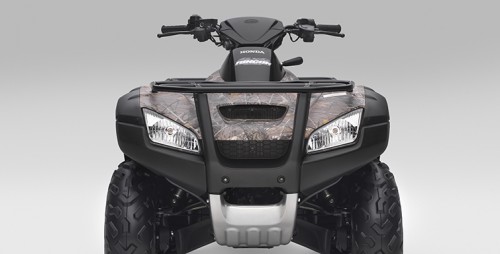 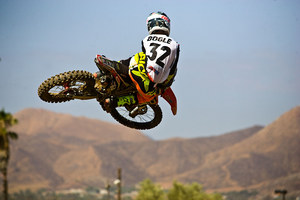