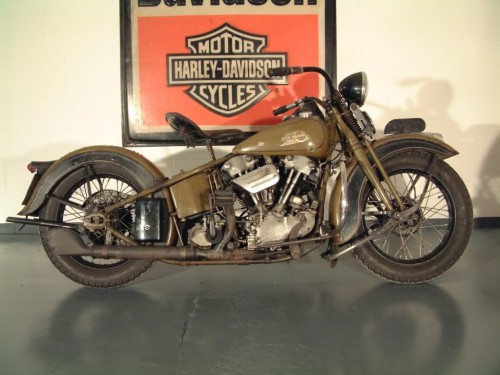 The Knucklehead was a revolutionary motorcycle when it was introduced in the 1930’s. It had a four-speed gearbox, dry slump lubrication, and overhead valve V-Twin when other bikes were mostly flatheads. Basically, this was the bike that made Harley-Davidson. Leno brought the bike in the eighties but it just sat in the corner for three decades. And then some day, Leno decided to get it running. Read the full article »

Chip Yates piloted his homebuilt 240hp electric superbike to 14,110 feet setting the world record for electric motorcycles on Pikes Peak and placing 2nd in class. Chip was hampered by 2.6 agonizingly slow miles of dirt, a huge oil slick on the Bottomless Pit right hand sweeper, and many hairpins had dirt strewn across them. Next year the course is entirely paved and Chip will be going for a top-10 or better result! Read the full article »

My name is Brandon Schrichten and have been some what of a film maker since my early teens. I have been a part of Scott Toepfer's photo journal project, "It's Better in the Wind" since the beginning. His enthusiasm, and creative drive for his project, sparked something in me as well. I realized the opportunity to start documenting our rides would help give me a whole new prospective on the riding experience. Read the full article »

„Stay A Hero” is the latest campaign from the Sussex Safer Roads Partnership, aiming to reduce the number of motorcyclists killed and seriously injured on the roads. „The film looks to remind bikers to ride safely for both themselves and their loved ones, and that they can inspire the next generation to ride skilfully and safely. Coming from a family of motorcyclists I hope the film illustrates the important contribution bikers make as role models and how their actions and approach to riding can directly influence those who look up to them,” said Daniel Cox, the writer and creator of ‘Stay a Hero, Stay Safe’. Read the full article » 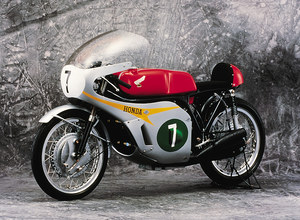 Winner of 10 out of 10 races in the 1966 World Championship series, the RC166 captured the Manufacturers' and Riders' Championships in the 250cc class for two consecutive years. In short, this is the 1966 RC166. This bike is the most glamorous racing bike ever built. 250 cc isn't the type of engine capacity that gets many riders excited but when you start listing some of the RC166's specs such as its six cylinder engine, 6 independent carbs, 62-64hp and 7 speed gearbox that is capable of 18,000 RPM, things get a little more interesting. And then of course you hear it running... Read the full article »

FC Barcelona is one of the most well-known soccer teams worldwide. Nine times world Trials champion Toni Bou released a stunt video set in FC Barcelona’s stadium, the Camp Nou. The reason: Bou’s favourite team and Manchester United face each other in Saturday’s UEFA Champions League final. The Catalan told Motoblog.it: “For fans of Barcelona like me, to come to the Camp Nou with the bike trial is something really special. Just the idea of being in the stadium is fantastic, plus the ability to train here is a true privilege”. Read the full article »

Australian custom motorcycle company Deus Ex Machina created this video of the Boundless Enthusiasm Bike Build Off event they put on the 27th of November 2010 at the Deus compound in Camperdown. As they write: „Ladies and genitals, dust off your Whitworths and recalibrate your King Dongs in readiness. It’s time to close your eyes and imagine a happy place, a place without boundaries where old American iron crossbreeds with 80s Japanese sport monsters. [...] Read the full article »

In North America, it's called 'Fast', but in South Korea, they call it 'Quick'. Here comes a teaser trailer for upcoming Korean big budget action flick QUICK, about a bomb-delivering motorbike rider. The trailer doesn't give much away, but it features a very fast motorcycle, a few explosions and a young lady with her dress being blown up by wind. I think it looks like a lot of fun. So turn up the volume and have a look. Read the full article »

Husqvarna released a new teaser video for its 900cc parallel twin engine that will power the first of a series of new road bikes. According to the video, this will be the most powerful engine in Husqvarna’s history. The development of the new engine is well underway thanks to the finance of parent firm BMW. This is one of the first steps that demonstrates the synergy between BMW Motorrad and Husqvarna for the development of street bikes. The first bike powered by this engine will be launched later this year. Read the full article »

British manufacturer Triumph has rolled out its 500,000th bike since its rebirth in 1990, which was restarted with the purchase of the firm by John Bloor. The 500,000th bike is a 2011 Speed Triple. To celebrate the special occasion, they are sending the special Speed Triple and UK comic Ross Noble on a 7-day tour of the British Isles, which is to be twitter-broadcasted. The tour starts on the May 24th. Watch the video after the jump. Read the full article »