The Interceptor® stakes out a special standing in the world of motorcycles, one that uniquely defines what only Honda can deliver. Famous for its distinctive V-4 power delivery, feel and sound, over the years it carved out a fiercely loyal following. When riders could own only a single motorcycle, thousands of enthusiasts insisted that one bike simply had to be a Honda Interceptor. Nothing else came close to matching the all-around capabilities that have made the Interceptor a true legend in its own time.

Now a new Interceptor extends this legacy of innovation, refinement and all-around ability. This Interceptor’s top-quality fit, finish and feel are unmistakable, so very characteristic of Honda. It’s lighter and more compact than before, and an infusion of new technology and bright-think additions raise it to a higher realm. Its big-time torque combines with sport-bike agility plus enviable comfort to create an unusually well-balanced bike with tremendously broad-ranging versatility. It’s perfectly at home with afternoon rides down twisty roads, weeklong trips or anything in between. 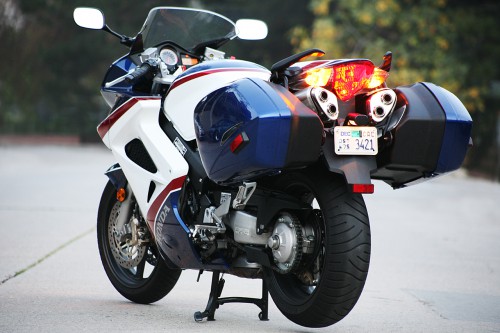 What’s New
Completely redesigned bodywork gives the Interceptor a whole new look while saving weight. With front-mounted radiators, the sleek bodywork is 1.5 inches narrower than before, although the difference feels even greater when straddling the bike. The slim feeling is aided by the seat, which narrows in front for an easier reach to the ground. Seat height is also adjustable-from 31.0 to 31.8 inches) for added adaptability to suit riders of varying heights.

An all-new single-sided aluminum swingarm similar in structure to the VFR1200F’s serves as an integral element in the Pro-Arm® rear suspension system. The Pro-Link® single-shock setup features a new damper with adjustable rebound damping and spring preload, while a new 43mm fork carries radially-mounted brakes with large 310mm dual discs and four-piston calipers. The hollow 10-spoke wheels are fine-die cast; a world’s first for this method of wheel construction.

The chassis incorporates a triple-box-section twin-spar perimeter-style aluminum main frame. The swingarm pivots in specially designed castings in the rear portion of the engine cases, not in the frame. To this, the 2014 Interceptor adds a new die-cast aluminum rear frame section, shaving 4.4 pounds off the steel subframe of the previous Interceptor. 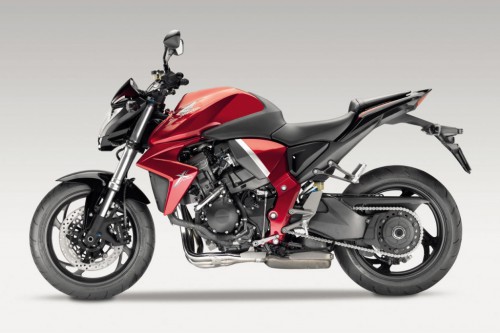 New Engine Tuning
The 782cc liquid-cooled 90-degree V-4 engine, notable for its slim profile, mounts as a stressed member in the frame. Engine tuning now places a strong emphasis on low-end and midrange power. These changes work in concert with new VTEC settings so the engine now jumps off to an impressively strong start and builds power up through the VTEC transition in linear fashion. (See sidebar for more on how Honda’s exclusive VTEC technology adds to the broad power spread.) When VTEC kicks in, the Interceptor spins up rapidly with plenty of authority at top revs-accompanied by that characteristic V-4 wail.

Credit new camshafts and PGM-FI fuel injection tuning, new porting and longer funnels in the air intake system for the VFR’s smooth power delivery. Air guides added in the upper radiator area and on the engine’s left side channel dense, cool air toward the air intake for added power. A new single-muffler exhaust system is shorter and lighter, paring 11.0 pounds off the high-mounted dual-muffler system on the previous Interceptor. The new exhaust system also helps lower the center of gravity for more responsive handling. 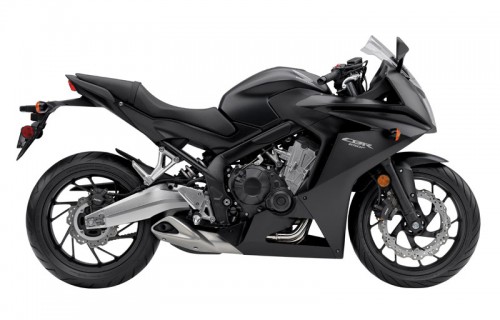 Additional Options
Because of its tremendous versatility, the Interceptor makes a great long-haul machine. To make it even better, Honda offers optional handlebar risers to create more upright ergonomics for long days in the saddle. The risers move the bars up 0.53 inch and 0.255-inch back toward the rider. For extended travels, optional color-matched hard saddlebags and tail trunk that feature a very integrated design can also be added. Like those developed for the VFR1200F, these saddlebags need no extra mounting hardware. They can be mounted or removed quickly and easily, without tools.

Another option marks a first for Honda: a Quick Shifter. With this system, a gearshift switch detects shifter actuation. The system interrupts fuel injection and ignition momentarily to facilitate rapid upshifts, with no need to disengage the clutch or change throttle openings.

Tapping into a rich V-4 heritage of groundbreaking designs, the Interceptor delivers a riding experience that combines refinement, sophistication and high performance with that exciting V-4 pulse that makes it uniquely Honda. As it was back in 1983, the 2014 Interceptor is one of the most capable machines ever to bear the Honda name.

The engine runs on two valves per cylinder for more efficient, high-velocity breathing at lower engine speeds. This produces a stronger torque curve. As revs build it automatically switches to four valves per cylinder to increase fuel flow for more horsepower-all in a seamless transition. With the 2014 Interceptor, this system has been fine-tuned so power builds in a more linear fashion than ever before. 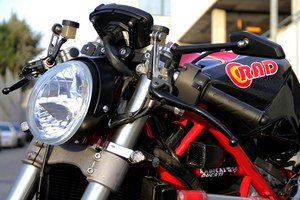