The Chinese have just revealed a Europen patent of a V-Twin that suggests that they may have plans to offer bikes in the old continent. The engine was introduced at a recent motorcycle show in Guangzhou, China. Now, before you laugh at them, just take a look at recent made-in-China cars and realize how fast their car manufacturers got in the last ten years. They certainly have the money to buy a smaller European or Japanese manufacturer to get the know-how and with an attractive price tag, the well-established companies could face a serious challenge.

Although there are no official technical specifications, the engine is a small displacement air-cooled V-Twin built in a simple frame. The bike, called the Italjet Buccaneer 250i, appeared at a motorcycle show in the city of Guangzhou. The bike has cafe-racer styling and got its name from a Yamaha-engined 125cc bike from the seventies. We are looking forward to hearing more news from the East. 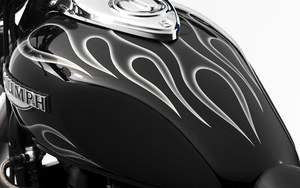