The Indian Chieftain has been Indian Motorcycles’ first faired hard bagger Chief. Here’s a glance at the 2016 model. Indian’s “Bagger” line of bikes offers a balanced compromise for touring cruisers with $4500 less luxury than their “Touring” line’s flagship, the Roadmaster. With a front fairing and good-looking saddle bags, the Chieftain is an eye-catching road trip machine. 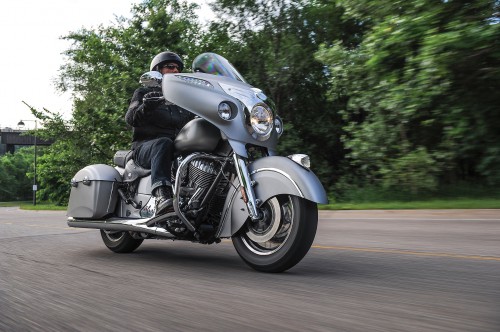 All Indian’s bikes use the same Thunder Stroke 1811cc (111cu in) triple cam, 49-degree v-twin—except the 1133cc (69cu in) Indian Scout. The Indian Chieftain is no different than the former, sporting the air/oil-cooled big boy power plant mated to a 6-speed transmission with wet multiplate clutch. Claimed peak torque is 119.2ft-lbs at 3000rpm. Power will reach 75hp most likely. Its 20.8L (5.5 gal) will keep you going, and real riders have reported an average of 40mpg in mileage. 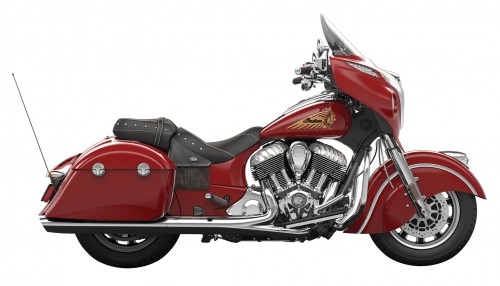 Passenger seats come standard on both the Bagger Chiefs. The Indian Chieftain is heavier than the Chief Vintage by 14lbs, with a power windshield and power-locking hard saddlebags as opposed to the Chief Vintage’s quick-release windshield and quick-release leather bags. The wet or curb weight of an Indian Chieftain is 385kg (848lbs), but its Gross Vehicle Weight Rating assures that the motorcycle can carry up to 630kg (1385lbs). Do the math and that’s 245kg (537lbs) of passengers and cargo. 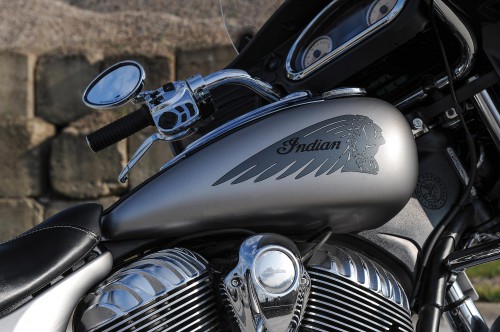 The Chieftain is audio capable with a 100-watt stereo with AM/FM bluetooth and smartphone compatible input. Their Premium Concert Audio speakers are located both in the the dignified front fairing and the hard saddlebags—shaped to almost mimic art deco pontoon-like fenders. 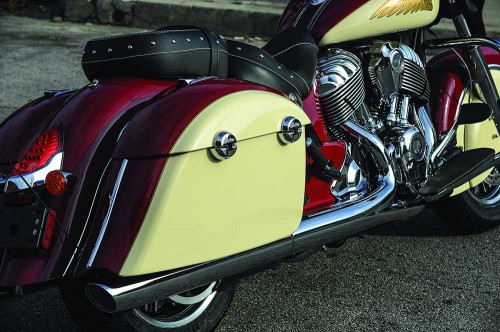 The classic lines of the bike are emphasised by sweeping chrome accents and by a new set of dazzling paint schemes: Thunder Black, Indian Red, Silver Smoke, and the two-toned Star Silver and Thunder Black. Plush genuine leather seats add to rider comfort, and contribute to the bike’s stunning design and luxurious looks. The Indian Chieftain is a class act. 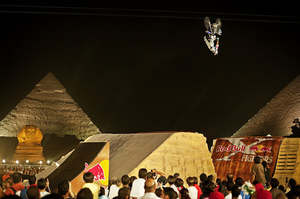