Earlier this month in Las Vegas, a packed auction room of international buyers bid on approximately 200 motorcycles from every era of history, for a total sum exceeding $2.5 million. Six bikes made in excess of $100,000, among them a very rare, factory prepared competition 1939 BMW R 51 RS, which made $130,200 after competitive bidding from US collectors. The 1939 BMW R 51 RS is one of only two known BMW factory racers in private hands and the only unrestored pre-War ‘Rennsport’ in existence. 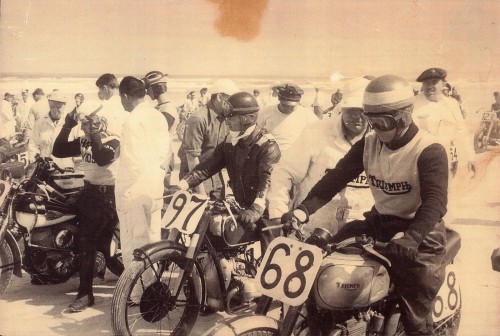 In the era leading up to World War II, German motorsport manufacturers were encouraged to participate in International automobile and motorcycle racing. The result was that in the 1930s, Mercedes and Auto Union dominated Grand Prix racing and BMW took the two biggest prizes in motorcycle racing. Ernst Henne rode various BMWs to break the World Motorcycle Land Speed Record in 1932/1934/1935/1936 and 1937. Henne’s 1937 record would stand for 14 years. In 1939, Georg Meier and Jock West finished first and second in the Isle of Man Senior TT race, the world’s most prestigious two-wheel event at the time. Both Henne’s last record and the 1939 TT winner used a traditional BMW boxer twin fitted with dual overhead cams and a supercharger. Victories like these reverberated worldwide and in 1939 in the USA, the BMW importer in New York, Emil Recke, wanted a racing BMW. Because of his factory relationship, he was able to secure a factory-modified R 51. This was one of just 17 that were intended to be loaned to known BMW privateers in Europe, and Recke was lucky to be able to purchase it. Because of American Motorcycle Association Class C rules it was not supercharged and retained the pushrod heads, but the frame, forks and swingarm were derived from the TT bikes.

Recke entered rider Joe Tomas at the Daytona 200 in 1940 and 1941. There was also an incident at an AMA 100-mile championship race at Langhorne, Pennsylvania (a one-mile circular dirt oval then known as the “Indianapolis of the East”). Tomas set what trackside observers felt was the fastest qualifying lap, which would have won him a gold watch, but the officials claimed the timing mechanism had failed and his time was disallowed. Many thought Tomas had been penalized because of prejudice against his German bike during the approach to World War II. After the war began late in 1941, Recke decided to sell the motorcycle. It went to racer Rody Rodenberg who lived in Indianapolis. Rodenberg first titled it in Indiana on May 9, 1942. This was a fitting purchase for Rodenberg, who was a well known Harley-Davidson hater. During his career he rode BMW, Indian and Triumph, but never a Harley. While the complete race record of this incredible BMW is yet to be unearthed, it is known that Rodenberg won a dirt race in Indianapolis. He also competed at the Daytona 200 from 1947 through 1952 and photographs show him on this bike. He retained the motorcycle for over half a century until it was sold on to another Indianapolis resident, Richard Moore in 1993. 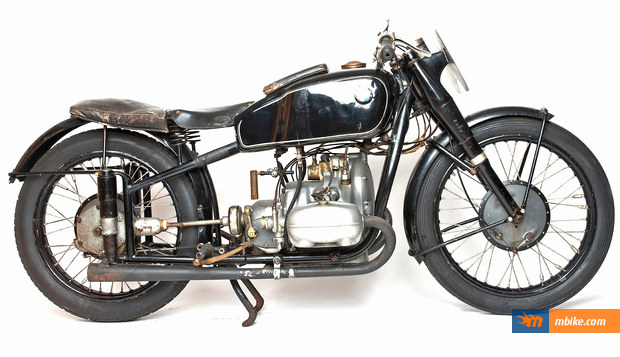 The R51 is unrestored

This pre-war, factory prepared BMW racer was sold with plenty of documentation, including the Certificate of authenticity from BMW Group Classic (the historic arm of the factory that maintains their archives), showing a date of completion of July 27, 1939 and consignment to the shipper in Hamburg the next day. There is also various correspondence between Rodenberg and Recke regarding the purchase of the bike, Rodenberg’s AMA competition licenses from 1951- 1953, various pictures of Rodenberg and the R 51 at Daytona, and even photographs of Rodenburg with Richard Moore on the day the bike changed hands in 1993. The bike itself remains unrestored. Daytona technical inspection clearance ribbons are clipped to the handlebars. The aged finish is the traditional BMW black with white coach lines, accented by black wheel rims. A sinister look is provided by the black pipes and megaphones. The single saddle is augmented by a pillion known as a ‘rennbrotchen’, and a tank pad to allow the rider a more prone position on the long run down Florida highway A1A that made up part of the old Daytona road and beach course. The lines are enhanced because the forks used then were sliders rather than the later Earls type. A large wing nut, rather than a wheel, is used to adjust the steering damper. The remnant of a decal from Rodenberg’s sponsor’s Indian dealership remains on the fender. A tiny 7,000 rpm tachometer hides behind the number plate, the front of its body more worn than the back due to sandblasting from the elements at various race courses.

Eventually sold for $130,200 after competitive bidding from American collectors, the 1939 BMW R 51 RS is one of just three that remain of the original 17 built, one of which is in the BMW museum in Munich. This is the only one that has not been restored, and with all the documentation that delineates the chain of ownership without a doubt, this must be one of the most historically significant BMWs ever to reach the auction block. 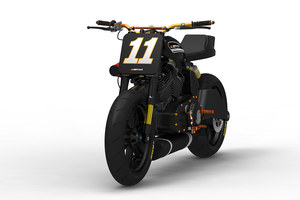