Watch the Honda VFR1200F being assembled

Kumamoto: Birthplace of the VFR 1200F in Honda motorcycle factories
One of the most modern and environmentally conscious factories in Japan.

The production line is 130 meters long producing one motorcycle every 90 seconds.

At the heart of the VFR1200F rests a light and compact 1237cc liquid-cooled 76-degree V-4 engine that draws directly from Honda’s V-4 RC212V MotoGP technology. Mass centralization plays a key role throughout this design, and as a result the VFR1200F incorporates a unique cylinder layout placing the rear two cylinders inboard in the center of the crankshaft, while the front cylinders are located outboard. Such a configuration narrows the rear cylinder head substantially as well as the entire rear section of the engine, right at the key rider/motorcycle interface–the seating area. Because the engine boasts remarkably slim dimensions, especially at the rear cylinders–overall, it’s more compact than the engine from the 781cc Interceptor–the entire chassis and seating area of this 1237cc machine features a distinctly narrowed profile. These pronounced, wasp-waisted ergonomics allow the rider to sit down in the bike rather than feeling perched atop the machine, and as another benefit the rider has a shorter reach down to the ground when bringing the bike to a stop. 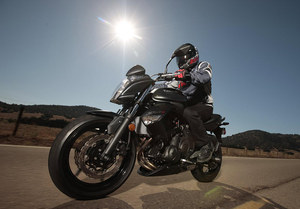