As Harley’s new, 2016 range roars onto the scene, the Road Glide Ultra once again returns, with CVO styling and the latest enhancements to come out of “Project Rushmore”. What you have here is a big, luxury cruiser, capable of touring the world…as long as there’s always a sealed road ahead. So what’s new? Let’s check it out! 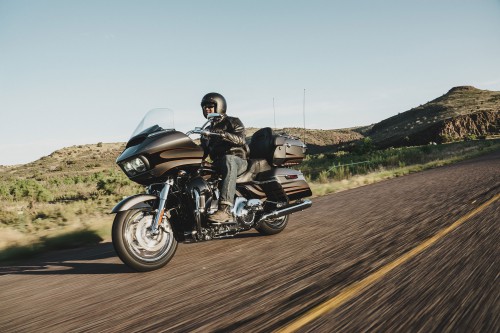 CVO stands for “Custom Vehicle Operations” and since its conception in ‘99 has been an “exclusive” range, taking existing Harley motorcycles and taking the liberty of “customising” them on your behalf – and then charging you a hefty sum for their efforts.

In terms of design, the 2016 CVO Road Glide Ultra is dominated by the Twin Cam 110 engine, which – as with all CVO models – holds pride of place, decked up to the nines in chrome and badging.

The classic Road Glide touring fairing – which has something of the Gold Wing about it – boasts mirror-chrome “slicer” wheels and comes in one of three bold, hand-finished paint schemes. But the rider who wants theirs in black or blue is out of luck. Harley say their CVO range offers the benefits of a factory-built bike, and it’s true, they do, but you might find yourself wondering what exactly is “custom” about it.

The latest batch of Project Rushmore updates also promise to improve control, which is good, because these are notoriously one of Harley’s worst handling machines. The CVO Road Glide Ultra weighs in at around half a ton and that’s before you, your luggage and your passenger. The low centre-of-gravity does help make the weight nice and manageable, but that all goes out the window when your pillion ascends to their throne. 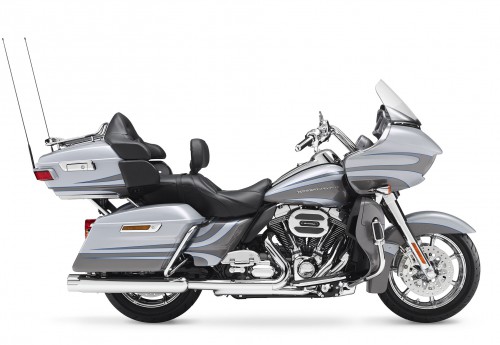 The 2016 CVO Road Glide Ultra features Harley’s latest lights, brakes and frame, which feels a little superfluous on a bike that can’t even go up a curb, let alone off-road.

The bike does sport Dunlop Multi-Tread Blackwall tyres, which give durability along with uncompromised cornering – exactly the right tyres for a bike like this – and a slightly tweaked cam has been optimised to put out more low-end torque. Always appreciated when overtaking.

Other Project Rushmore updates for the 2016 CVOs include controls you can operate without letting go of the heated handlebar grips, improved rear suspension, seat textures, big, lavish back rests and everything you need to create the illusion that you’re not riding a motorcycle.

“The most comfortable machines on the road…the kind of comfort that would make a sultan on his silk divan jealous,” say Harley. More like the kind of seat that old men die in. 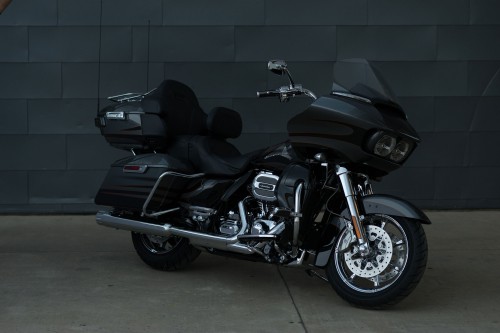 Just in time for Christmas, the 2016 CVO Road Glide Ultra is stuffed like a turkey with technology – colour touch-screen, voice activation, speakers that automatically adjust the volume (as well as the bass and treble) to the speed limit of your current location.

Let’s face it, a CVO motorcycle is a status symbol, and for the majority of experienced riders, this is not what motorcycling is all about. If it’s comfort and technology you want, why not stay at home in your arm chair? With this one, Harley may have gone too far.