Suzuki shocked a lot of people with the GS1000 series when it was revealed in the Paris motorcycle show in Paris in 1977. Other manufacturers had already introduced liter-sized engines so Suzuki was joining the 1,000cc party a bit late but the GS1000 reached cult status very fast and this series set the foundations for not only subsequent production bikes, but also four-stroke racing success too. Suzuki has now announced that the GS1000S will be added to the firm’s popular Vintage Parts programme. 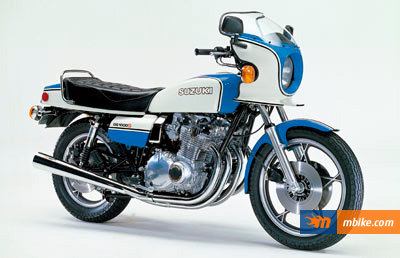 Back in the seventies, European and Japanese manufacturers competed against each other by making larger and more powerful motorcycle engines. The key word was 1,000cc – this number looked – and still looks – cool on the side panel. The legendary Kawasaki 1000 hit the market in 1977 while Yamaha offered the powerful XS11. Honda had the GL1000 Gold Wing. And what did Suzuki offer? They largest displacement bike was the GS750 in 1977.

The GS750 was a fine bike but its 750cc engine did not deliver enough performance to compete with the Z1000 or the XS11. Suzuki decided to build a more powerful bike that was based on the GS750 – this would be the new GS1000 series. The engineers lengthened the stroke from 56,4 to 70 mm while cylinder displacement was enlarged from 748 to 997cc. Thanks to the complete overhaul of the rest of the engine, the new 1,000cc unit was actually lighter than the 750cc version. This was quite an achievement from Suzuki’s engineers. 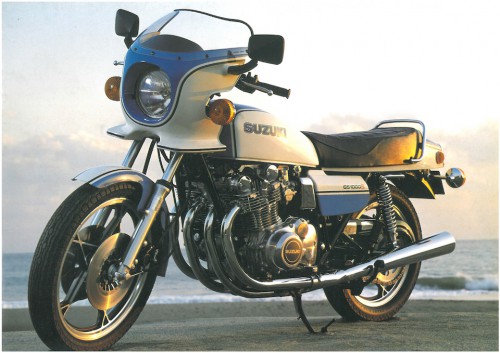 The GS1000 featured a tubular steel cradle frame, five-speed gearbox, chain final drive, new rear end and upgraded suspension parts including an air and oil dampened front fork. The GS1000S was first showcased in the Paris motorcycle show in 1977 and arrived in European and American dealerships in February 1978. (None of the 1,000cc models were sold in Japan since selling motorcycles with larger than 750 cc engines was not allowed until 1990.)

The S version came a bit later in 1979. The letter S means that the bike has a cockpit fairing to make it look more sporty. There were other changes, too. The GS1000S featured a larger, 18 inch rear wheel (comapared to the 17 inch wheel of the base version) and non-pneumatic rear suspension. The beautiful GS1000S was the best one-litre machine at the time. The 1,000cc inline-four had a maximum output of 90hp at 8,200rpm and 78Nm (8,5 kg-m) of torque at 6,500rpm. Dry weight was 238 kg (524 lbs) – the fairing added 5kg to the weight, top speed was about 130mph. The GS1000S was available in color combinations Blue/White and Red/White. 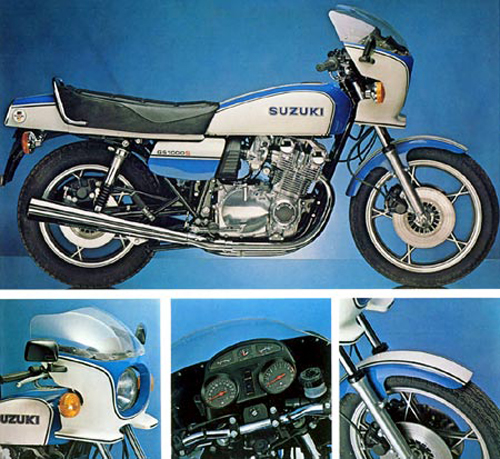 The GS1000S was manufactured until 1981 – it was replaced by the GSX1100S Katana. Despite being only two years on the market, the bike reached cult status very fast. It was fast, had great handling and brakes and the 997cc engine was one of the most reliable motorcycle engines in history. In addition to that, the bike was very successful on the racetrack. Wes Cooley won the ’79 and ’80 AMA Superbike Championships on the GS1000S. After that, many fans built their own Wes Cooley Replicas and the best of these replicas are nowadays collector’s favourites.

Now the bike get the place in Suzuki’s history it deserves: Suzuki has now announced that the GS1000S is the latest model to be added to the firm’s popular Vintage Parts programme, with nearly 1,000 parts still available for the iconic machine. Suzuki GB’s Tim Davies said, “The GS1000 is renowned for its classic status and is still desirable today, and we’re delighted to be able to add it to our Vintage Parts programme, with so many parts still available. As a result it makes maintaining or restoring one of these iconic machines even easier, with owners manuals and other parts booklets available to download for free from the Vintage Parts website too.” 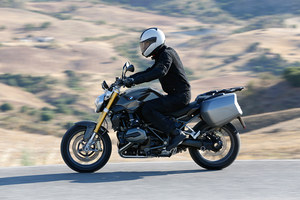