Why encourage motorcycle use?

A Belgian study finds that if 10% of car drivers swapped for motorcycle, it would reduce traffic congestion by 40%. European government officials, industry experts and researchers discuss how more bikes on the road would make motorcycling safer. We took a look behind the horrible numbers of motorcycle safety around the world and collected a couple of arguments why more bikes would help us all. 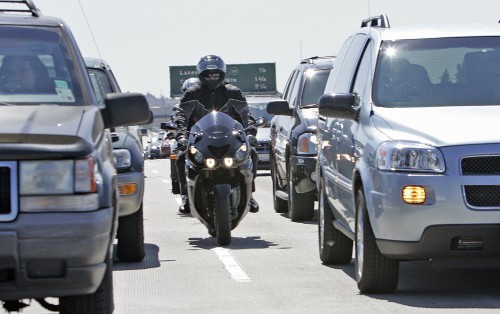 There is no denying that motorcycles are more dangerous than cars. But how dangerous are bikes exactly? Here are some really depressing statistics from various sources:

- According to the U. S. National Highway Traffic Safety Administration (NHTSA), 72 per 100,000 registered motorcycles ended up in fatal crashes. The rate for cars is about 13.
- Between 2001 and 2008, more than 34,000 motorcyclists were killed and an estimated 1,222,000 persons were treated in a U.S. emergency department (ED) for a non-fatal motorcycle-related injury.
- The highest death and injury rates are among 20-24 year-olds, followed by 25-29 year-olds.

Meanwhile in the UK

- Serious injuries for motorcyclists rose by 10% while all rider casualties were up 8% in a year (2012-2011)
- Total reported motorcycle user casualties increased by 8% to 20,150 in 2011.
- The figures also show that 48% of crashes between motorcycles and cars were the result of the car driver failing to look properly.

Not very positive, is it? But there’s more:

- Nearly 70% of motorcycle accidents in Europe involve a car, lorry or bus.
- 48% of crashes between motorcycles and cars are the result of the car driver failing to look properly.

There’s plenty of room for improve safety for riders, but how? The UK government and the Motorcycle Industry Association launched a new initiative last year: they held a conference to discuss how to improve safety for riders. Together with other European researchers, couple of days ago they announced a new landmark policy document to encourage greater use of motorcycles on UK roads. It’s called Realising the Motorcycling Opportunity; A motorcycle safety and transport policy framework.

All participants agreed that traditional road safety policies directed at motorcycling will only partially deliver more positive outcomes for motorcycle safety beyond those already achieved. However, encouraging motorcycling should have better improve safety for the riders. Their idea is backed up by a study made by Transport C Mobility, Leuven, Belgium in 2011.

In this analysis, researchers examined the effects of an increased share of motorcycles in commuting traffic. They simulated the model for the highway stretch between Leuven and Brussels. As it turns out, a modal shift towards motorcycles results in shorter queues that disappear sooner. Travel times are significantly shorter. When 10% of all private cars are replaced by motorcycles, total time losses for all vehicles decrease by 40%. 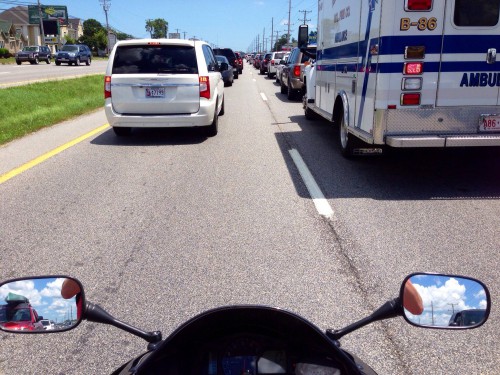 But there’s another way of making motorcycling safer: lane splitting. According to US statistics, rear-ender is the most common type of accident, these make up 40% of all accidents. Riding in between lanes of traffic saves a lot of time and is considerably safer than sitting between cars and trucks. Of course, lane splitting seems dangerous but according to a a recent Berkeley study undertaken with the California Highway Patrol’s assistance, 7,836 motorcycle crashes were examined. Only 1,163 of these crashes occurred while the rider was lane splitting.

Unfortunately, lane splitting is illegal in certain places, such as most of the US or Germany but it should be legalized in all highly urbanized areas of Europe and North-America. Until new policies and ideas turn into bills and regulations, here’s our advice: ride safely.

If you are interested in a motorcycle airbag jacket, see this MotoAir V-900 Motorcycle Airbag Jacket 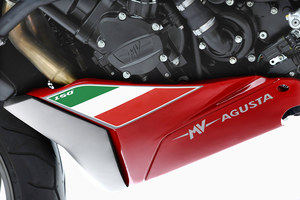