Twice a year, motorbike fans from all around the world converge on the Isle of Man. Since 1907 this small island in the Irish Sea has hosted the Tourist Trophy, the oldest and most challenging motorcycle race on the calendar. For 14 days in May/June there’s only one game in town: the races on the Snaefell Mountain Course. The second motorcycle get-together in this otherwise tranquil sliver of land traditionally takes place in August, when the Classic TT (Tourist Trophy) roars into life with no less enthusiasm – if not quite the same speeds. The start and finish of the races are in the capital Douglas.

Nowhere else in the world does the native population regard a sporting event so staunchly as their own local skirmish, yet lay on a warm welcome for all visitors. Georg Meier, for example, is virtually unknown in Germany beyond motorcycle circles, but on the Isle of Man he’s a household name and remains a legend here to this day. 75 years ago “Schorsch” Meier became the first rider from outside Great Britain to win the Senior Tourist Trophy – on a supercharged BMW “Kompressor” machine.

The 2014 Classic TT will run from 20 – 29 August, and BMW Group Classic will be in attendance with a large truck, a tent, and an exhibition of classic and current motorcycles bearing the BMW badge. Three of its machines will also take part in the legendary Lap of Honour. One of them, the supercharged BMW 255 piloted to victory by Georg Meier 75 years ago, will be ridden by his nephew Wolfgang Meier. It will be joined by a 1937 BMW R 5 SS and a BMW R 51 from 1939. 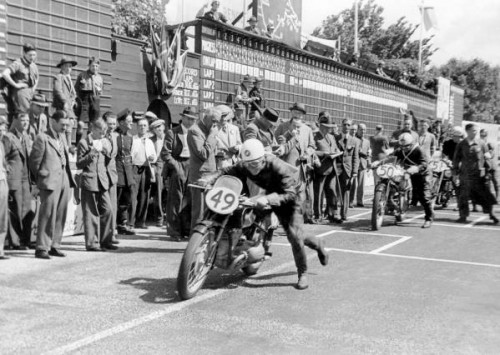 Jock West added to BMW’s 1939 success with his second place, also on a Type 255 BMW RS 500. This machine used a mechanical supercharger to develop 60 hp at 7,000 rpm from its 492cc displacement. In order to properly handle these high revs, the engines featured side shafts leading into the two cylinder heads, and two overhead camshafts in each cylinder head controlled the gas cycle. Benefiting from low weight, the supercharged BMW hit speeds of over 220 km/h (137 mph). Meier, who started out as an off-road rider and had only completed his first season in road competition the previous year, recorded a sensational average speed of 143.723 km/h (89.305 mph) on his way to the win. And that on an island course that took the riders along approx. 60 kilometres (37 miles) of ordinary country roads – through villages and past house fronts, skirting walls and hillsides, and over bridges shorn of none of their devil.

But BMW’s presence at the Classic TT extends beyond the company’s history; after all, its present-day exploits are also generating some extraordinary tales of success. At the start of June 2014, Northern Ireland’s Michael Dunlop rode a BMW S 1000 RR to Senior TT victory on the Isle of Man – 75 years on from Georg Meier’s triumph. The same model had already swept Dunlop to success in the Superbike and Superstock races on the island to set up a historic triple, and will likewise be on display at the Classic TT.

BMW will also be greeting the assembled crowds with a BMW R nineT. Launched in spring 2014, this contemporary interpretation of a classical concept is the brand’s newest series-produced model. The BMW R nineT blends pared-down design with a boxer engine, a construction that has proved its mettle over more than 90 years, again forging a seamless link between past and present. Technically, the R nineT is largely identical to the BMW R 1200 R, but that model’s Telelever has been replaced by an upside-down telescopic fork, while radial brake callipers and a four-component frame construction also feature. The air/oil-cooled flat-twin boxer engine has displacement of 1,170cc and generates maximum output of 81 kW/110 hp.