British manufacturer Triumph has rolled out its 500,000th bike since its rebirth in 1990, which was restarted with the purchase of the firm by John Bloor. The 500,000th bike is a 2011 Speed Triple. To celebrate the special occasion, they are sending the special Speed Triple and UK comic Ross Noble on a 7-day tour of the British Isles, which is to be twitter-broadcasted. The tour starts on the May 24th. Watch the video after the jump. 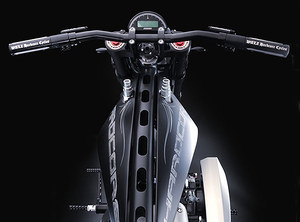