India’s Army Service Corps (ASC) Tornados Team successfully mounted 54 persons on a single Royal Enfield Classic 500 motorcycle on Sunday the 28th of Nov 2010. This record attempt surpasses the earlier attempt of 48 people on a single motorcycle which was also set on the Royal Enfield Classic 500. The motorcycle used for this attempt did not have modifications in the engine. They rode for a distance of 1,1km at the Yehlanka Air Force Base in Bangalore. The Tornados already hold seven world and national records.

54 Army stunt riders at one bike 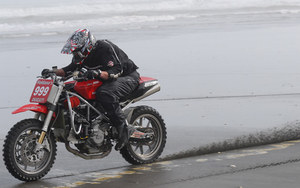