Along with the 2011 Aprilia Dorsoduro 1200, Piaggio Group unveiled another bike, the 2011 Moto Guzzi V7 Racer. The model pays homage to the classic V7 Sport race bike of the ’70s. The V7 Clubman Racer was initially announced at EICMA show as a 2010 production model but Moto Guzzi’s parent company later said it was a mistake. Well, there’s no mistake this time, the bike enters production as a limited edition model. 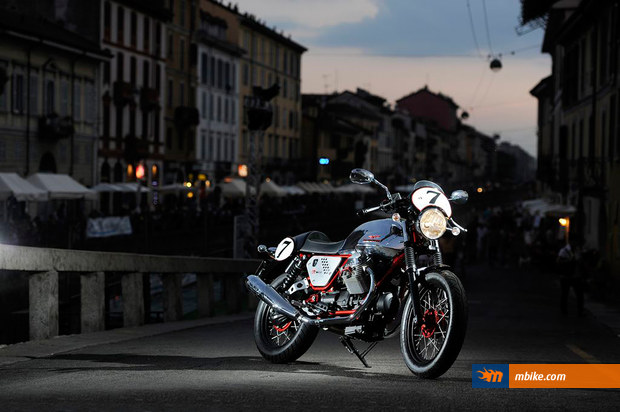 The production version looks the same as last year’s concept, it appears to only change its name. The motorcycle features a leather strapped chrome tank created using what Moto Guzzi calls an innovative metal particle deposition technology. The red frame was inspired by the earlier V7 Classic models, and is paired with the matching red hubs and swingarm. Technically, the V7 Racer is similar to the V7 Cafe. At the heart of the machine is a 744cc 90-degree V-Twin engine which delivers a slightly disappointing 49hp at 6800 rpm and 40 ft-lb of torque at 3600. Suspension is provided by a 40mm Marzocchi front fork and fully adjustable Bitubo rear shocks. The braking system comes from Brembo, which uses a 320mm disc at the front and a 260mm disc at the back.