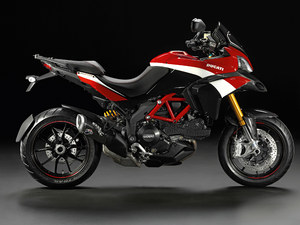 German firm Mercedes-Benz and Italian manufacturer Ducati announced their partnerhip last November, which includes sponsorship of the Ducati MotoGP team as well as various marketing opportunities. Now, we can see the first of likely many commercials featuring this partnership. Mercedes-Benz’s high-performance tuning subsidiary AMG has released the C63 AMG, which tries to beat a woman riding a Ducati 848 EVO. Read the full article » 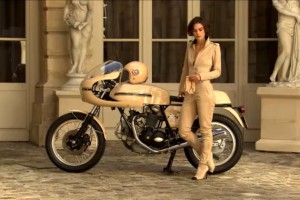 If you remember, a couple of months ago 25-year-old British actress Keira Knightley shot a new Chanel advertisement at Concorde Place in Paris. Now, we can see both the teaser video and the full length version of the Coco Madamoiselle film „Gabrielle” directed by Joe Wright. Clearly, Keira wasn’t riding the Ducati 750 Sport as the bike was on training wheels during the shoot. And the Ducati? On the video, Keira talks about the bike and her beige leather catsuit. Read the full article » 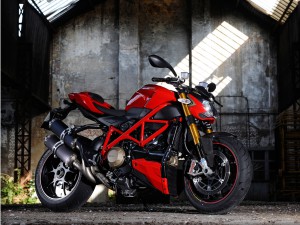 Until now the big supermoto category has been ruled by the KTM 990 Supermoto R and the Ducati Hypermotard 1100 EVO, which was recently updated for the 2011 model year. Now, there’s a new player out there. The Aprilia Dorsoduro 1200 features a host of electronic rider aids and the Italian machine offers the most powerful V-twin engine in the category. But is this enogh? Note: look at the guys in the back playing around. Read the full article »

To celebrate Greg Tracy’s last year win at Pikes Peak, the Italian manufacturer created a special edition version of its Multistrada 1200 S. The special Multistrada features Ducati Corse paint livery, black engine guard and red pin-striping on the wheels. In addition to that, the bike will be equipped with Ducati Performance silencer by Termignoni, a carbon fibre front mudguard, custom made seat detailed with red stitching and a race-derived low screen. Read the full article » 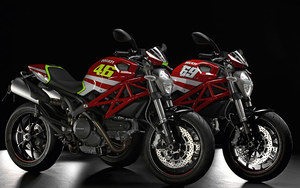 As final preparations for the massive “Ducati MotoGP Night” are made ready for the city-centre event on the evening of Friday, 4 March, Ducati reveal two new Monster Art colour schemes dedicated to Nicky Hayden and Valentino Rossi. First introduced in 2009, the innovative Monster Art project offered an additional range of colours to the standard factory options with a collection called “Colour Therapy”, while in 2010 the introduction of the “Logomania” collection celebrated 50 years of historic Ducati logo styles. Read the full article »

Italian motorcycle magazine Motosprint made an exclusive interview with Claudio Domenicali, Ducati’s general director. Domenicali revealed that the board of directors is seriosly thinking of deveoping two new models. The first one is a scrambler style two-wheeler, while the second is a maxi scooter. The Italain company wants to extend its production to 60,000 units a year. To do this, they plan to open a new factory in South America. Read the full article »

Aprilia is going to introduce a new, large-displacement touring bike that will compete with the Ducati Multistrada 1200. Italian magazine Motociclismo.it was able to take a photo of the bike, which will share some parts with the Dorsoduro 1200. The composite frame, the 1200cc engine and some parts of the chassis comes straight from the big Dorsoduro. Details are scare but it’s clear that the bike will feature Brembo brakes and Öhlins forks. The new Caponord will most likely be revealed at the end of this year. Read the full article »

Spain's Carlos Checa (Ducati Althea Racing) scored a splendid double win at Phillip Island, a repeat of his double win at Imola last September. Just like in the first race, no one was able to run with the Spanish rider and he finished a couple of seconds ahead of Max Biaggi (Aprilia Alitalia). The reigning world champion battled it out for the runner-up slot in the final stages with an impressive Marco Melandri (Yamaha World Superbike Team), just getting the edge at the line. Read the full article » 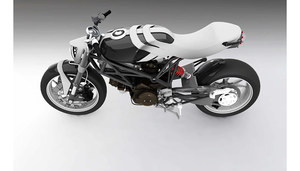