Do you think that the Honda VFR1200F lacks character? Is it a boring bike? Then try the Ariel Ace – it has the same engine but it’s a completely different bike, a real animal. The Ace is a dramatically styled and powerful V4 roadster built by the same company that created the magnificent toy called Ariel Atom. Ariel wants to build 150 bikes a year and is estimated to start at around 20,000 British Pounds. 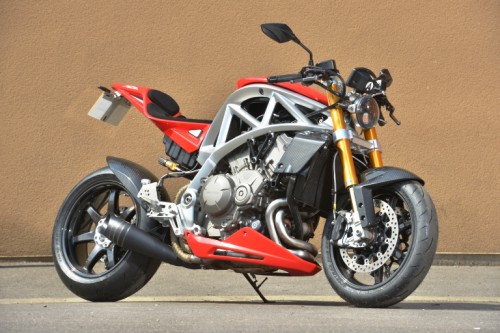 Ariel is best known for its impressive lightweight sports car Atom, which was created for adrenaline junkie drivers. The quirky-looking Atom has fearsome power to weight ratio. I was fortunate enough to drive one on a circuit and believe me, it has superbike levels of acceleration so I was real curious what they’ve come up with this time.

But their new machine isn’t a car but it’s a bike. That’s right, Ariel is launching an all-new bike for the first time in 44 years. The head of Ariel Motor Co, former GM and Porsche designer Simon Saunders wanted to restart motorcycle production since he founded the company a decade ago. Well, he’s pretty close to his dream, production of the Ace should start in this year.

The bike is called the Ace and it is a stunning-looking bike. The Ace features a minimalistic bodywork so you can see the whole aluminium frame and the big V4 engine.  It looks like a radical custom bike and the Ace will be built by hand indeed. The frame takes 70 hours to fabricate and has an adjustable head angle, from 21.8° to 28.4°.

The customer can choose any front end, from Showa forks, to a fully adjustable Ohlins TTX stock. But the customer can change other parts, too.  Would you like more carbon fibre? A different seat unit, 14.1 litres tank, or 21.3 litre tank? Girder forks or Ohlins? Step this way. There’s a myriad of options available. That’s why there’s no point discussing the riding position – there are three different seat heights available and wheelbase, steering rake angle can be different, too. 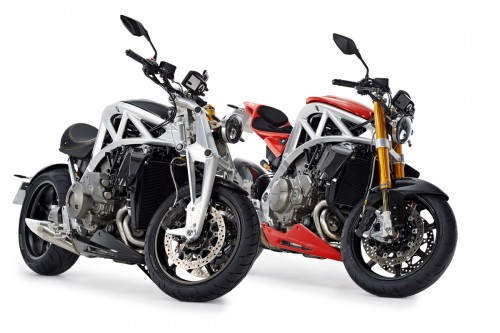 The engine comes from Honda. The V-four is a bit more torquey than in the VFR, at 96.6lbft compared to 95.1. Peak power is unchanged at 173hp. 0-62 is said to take 3.4 seconds alongside a claimed top speed of 165mph, with Ariel claiming the Ace’s performance “has been aimed at the average rider being able to extract comfortable and consistently attainable performance”. Customers can choose between a six-speed manual and the dual-clutch DCT gearbox.

But no matter what components the customer chooses, one constant is that riding the Ace is exhilirating. The V4 has more then enough power and the exhaust system burbles as the engine surges towards the red line at 11,000rpm. But despite its power and speed, the Ace is not a sportsbike. It’s a powerful roadster with unique styling, a bike that can draw a crowd. 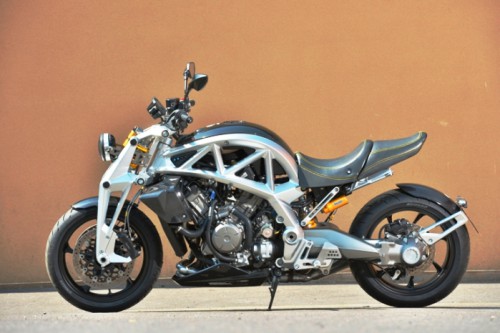 The Ace is a unique roadster

Simon Saunders, Director of Ariel says, “Motorcyclists have a real passion for their machines. They like them to be individual and they want them to be their bike, not just another bike identical to hundreds or thousands of others. The usual route is to buy a standard bike and then add various aftermarket components to change the bike into what they want. However with the Ace the uniqueness is built in as the bike is produced and each one will be as individual as its owner.”

Ariel already  guaranteed its new motorbike can be returned to the factory when new upgrades become available. The basic bike will start around  £20,000. Some will say that it’s too expensive but the Ace offers a unique experience and a bike that you would never forget riding.