If the Isle of Man TT is the toughest on-road motorcycle race in the world, then the Erzberg Rodeo is the craziest race off the road. This mining pit in Austria is a very special venue: the course is 22 miles long, and the terrain is insanely rough. This year, Andreas Lettenbichler, Alfredo Gomez, Graham Jarvis, and last year’s winner Jonny Walker all crossed the finish line together. Click through for the some cool videos. 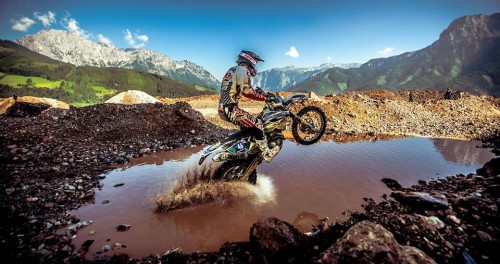 This year’s edition of Red Bull Hare Scramble on Sunday once again pushed the fastest 500 competitors to their limits, with only 5 riders completing the course within the four-hour time limit. A brand new section introduced for 2015 left even the favourites shaking their heads and resulted in the first ever four-way tie for first place in the history of Red Bull Hare Scramble.

In 2015 the Erzberg Rodeo once again more than lived up to its fearsome reputation as the toughest Xtreme Enduro Race on the planet. This year’s edition of the event was decided at the new “Downtown” section shortly before the finish line. Such was the scale of the challenge that the leading six riders were forced to help each other drag their bikes through a seemingly unpassable forest. After more than an hour of backbreaking teamwork, four of the six emerged on the other side and opened the throttle in a final dash for the chequered flag. The fearsome foursome of Jonny Walker (UK), Alfredo Gómez (ESP), Andreas Lettenbichler (GER) and Graham Jarvis (UK) crossed the line side by side after precisely four hours of racing and were welcomed with a huge round of applause by the crowd in the finish area. In recognition of the exceptional riding and determination shown by all of the athletes, organizer Karl Katoch announced the first ever four-way tie for first place.

“Red Bull Hare Scramble was totally different this year than last year,” commented Jonny Walker (UK). “Without all the guys pulling together it would have been almost impossible to finish.”

The first section of the feared course – a steep gravel climb – saw several riders forced to abandon, including a number of favourites who had started on the front row but quickly found themselves sliding back down the slippery slope. It was last year’s winner, Jonny Walker from Great Britain, who mastered this tricky ascent best and established a small lead on the chasing bunch. Among the high-profile names whose race day came to an early end was five-time Erzberg winner and hot favourite Taddy Blazusiak (POL), who crashed early and was unable to continue. 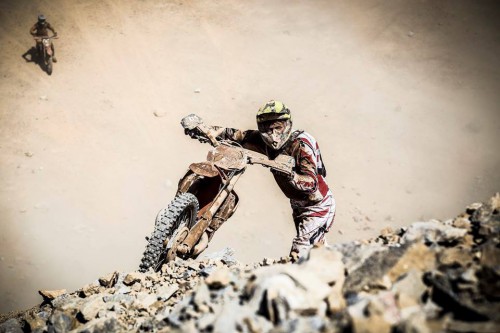 As Blazusiak rued what could have been, Walker powered up the Iron Mountain. The only rider able to follow the youngster was fellow Brit and 2013 winner Graham Jarvis (UK). A little further back, Alfredo Gomez and Andreas Lettenbichler (GER) kept things interesting with a ding-dong battle for the final podium place. As the elite riders made their way towards the make-or-break sections, dozens of competitors further back were forced to admit defeat after failing to make it past the energy-sapping first part of the course.

Machine, Bathtub, Carl’s Dinner, Dynamite and the brand new Downtown – as in previous years, this year once again the key sections of the course carried seemingly harmless names which nevertheless strike fear into the hearts of even the best enduro riders. For 2015, Erzberg Rodeo organiser Karl Katoch ratcheted up the difficulty level even further by introducing several new and devilishly difficult obstacles and adding 35km to the total race distance. The result was spectacular crashes, smoking engines and plenty of expletives screamed out into the sky by riders pushed to their mental and physical limits. 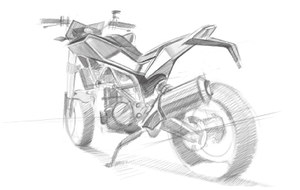