Turning a Harley Forty-Eight into a streetfighter-style motorcycle? Now, that sounds like an ambitious project and that’s exctly what Taiwanese custom garage Rough Crafts did here. The bike, nicknamed “Hooligan Tactics”, features Harley XR1200 swingers, inverted forks, Progressive shocks and a list of other unique details that, including a unique digital camouflage paint job. Click through for more details.

The project started with a customer who gave his slightly customized Forty-Eight to do whatever the guys at Rough Crafts liked with it.

„After the Urban Cavalry build, the idea of a Sportster/Street Fighter version of it has always been in my mind, when an owner brougt us a slightly modified 48 and told me to do whatever I want with it, it’s the perfect chance, just so happened I have a XR1200 swingarm laying around, the rest of it like inverted forks, Progressive Suspension piggyback shocks… etc kinda just falls into place naturally, then developed a prototype seat/tail section that’s going to production soon, you’ll see it works out well with Streetfighter, tracker, or cafe racer, for the paint I want to push the “tactics” feel more so went with a blue-ish grey digital camo which was rarely used in the custom Harley scene and it worked out perfectly. and yes the tank was modified from a sportster tank too.” says Winston Yeh from Rough Crafts. 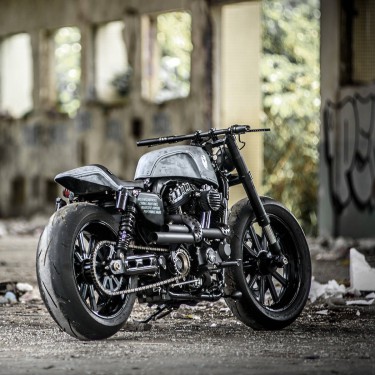 He makes it sound easy but making this marriage is everything but easy. But the result is a striking, fascinating custom that catches attention no matter where you are.