Petrolicious has released its newest mini documentary about a 1968 Honda CB160 race bike nicknamed Triple Nickle. As always, the Petrolicious video has fantastic cinematography but the audio is just as perfect. If you like vintage racing motorcycles, click through and listen to that revving engine.

“I just knew I wanted to ride,” says Stacie B. London. “I had a picture of the bike that I wanted in my head…and it was coincidence and luck that I managed to find it.”

“Going to that first race is when I realized I needed to race. There was nothing more clear to me that I needed to experience what it felt like to do that,” London says. “I didn’t really know what that meant, that I’d been in the shop every night for hours…and on weekends…”

With a Master’s in Industrial Design and, until a few years ago, little interest in motorcycles, London’s introduction and approach to racing have since encouraged many more to don leathers and live life on two wheels.

London maintains Triple Nickel herself, with the help of a mentor, Ralph Hudson.

Through many obstacles—including a broken collarbone and finding parts for such a rare motorcycle—London’s first season of vintage riding has been both challenging and thrilling.

“What I get out of it is this incredibly rich experience… In some ways, I got swooped up into this process that I wasn’t expecting,” London says. “Now it’s about discipline, focus, staying calm, adapting…”

“It kinda went from girls posing on bikes, and being pinups…now the pinups are riding.” 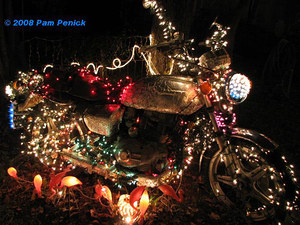