It seems that scramblers are truly back. After Triumph and Ducati, BMW also created its own (custom) scrambler that was revealed yesterday at the Wheels & Waves Festival in Biarritz, France. Based on the existing R nineT, the Path 22 is BMW Motorrad’s first-ever Scrambler. The bike is stripped down to the essentials, every element and surface has a function and it was designed for surfers in impressive 1950s style. 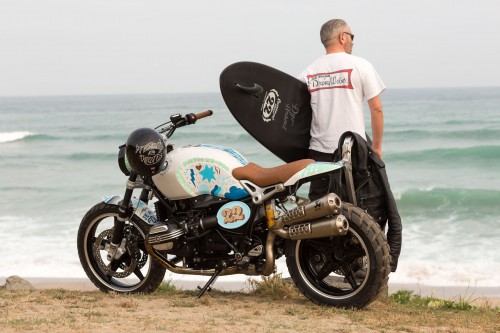 There has been a great week for BMW. They released the new 7 Series but they also presented something much cooler, in the form of a motorcycle. The Concept Path 22 is a scrambler, a type of bike designed to venture far off the beaten path. The first scramblers in the 1950s were modified road machines with deep-treaded tyres, somewhat increased spring travel and a raised exhaust for off-road riding. These features gave the bikes a characteristic appearance that came to symbolise an attitude. The Concept 22 follows exactly this path. 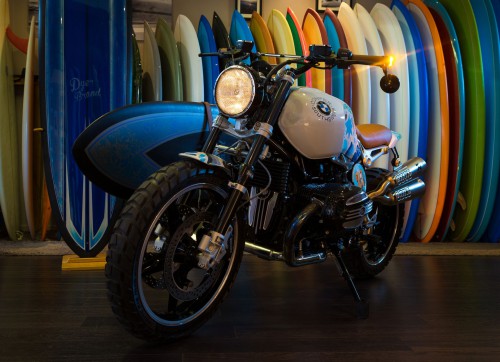 This is BMW’s first ever scrambler

The bike is the result of a collaboration with motorcycle club Southsiders, artist Ornamental Conifer and San Diego-based surfboard manufacturer Dyer Brand. “Based on our scrambler interpretation, we wanted to create a kind of projection of the particular blend of people and cultures to be found at Wheels & Waves. And we found the perfect partners to do just this. The BMW Concept Path 22 captures everything that makes the Wheels & Waves people, festival and lifestyle so special”, says Edgar Heinrich.

Cafe racer converted into a scrambler

For this reason, the bike features its own distinctive paint finish complete with BMW leather jackets designed especially by Ornamental Conifer and two surf boards created exclusively by Dyer Brand. The name “Path 22″ refers to one of the insider secrets among Europe’s surf spots. This particular stretch of beach is inaccessible to cars, located on the Atlantic coast of southern France, half an hour’s walk through one of Europe’s biggest pine forests. The path leading to this spot bears the number 22. 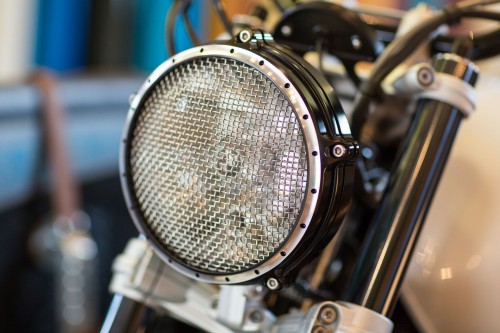 Speaking of the bike itself, it is stripped to the basics. It has studded tyres, stitched leather seat, scrambler-style Akrapovic tailpipes in high-quality stainless steel, Öhlins and Gilles Tooling suspension parts, custom made milled aluminium wheels. The turn signals era integrated into the handlebar ends. One of the coolest detail is the classic circular headlamp. The headlamp pan, fuel tank and mudguards of the BMW Concept Path 22 bear the artwork of Ornamental Conifer, alias Nico Sclater. As the bike is based on the R nineT, it is powered by the same two-cylinder boxer engine with cardan drive.

Will BMW build a real scrambler?