BMW Motorrad presents a breathtaking concept study, the BMW Motorrad Concept 101 at the Concorso d’Eleganza Villa d’Este. The custom cruiser features a six-cylinder 1,649cc engine, streamlined silhouette designed by Roland Sands and a fair amount of brushed aluminium and carbon. Click through for the striking Concept 1. 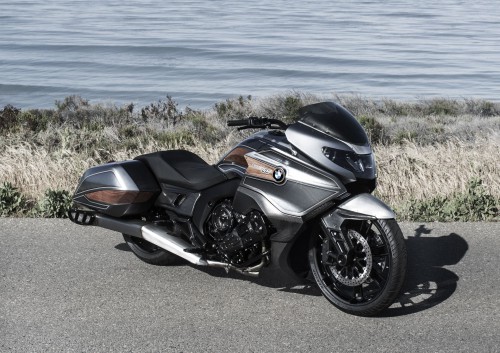 “The Concept 101 opens up a new chapter in the history of our concept bikes. It is the BMW Motorrad interpretation of endless highways and the dream of freedom and independence – the perfect embodiment of “American touring”. Designing this big touring bike study was amazingly exciting for us because we haven’t been involved with a motorcycle concept like this before. To me, the Concept 101 is the epitome of elegance, power and luxury on two wheels,” says Edgar Heinrich, Head of BMW Motorrad Design, describing the character of the concept bike and he is certainly right since BMW did not have a bagger in its long history. 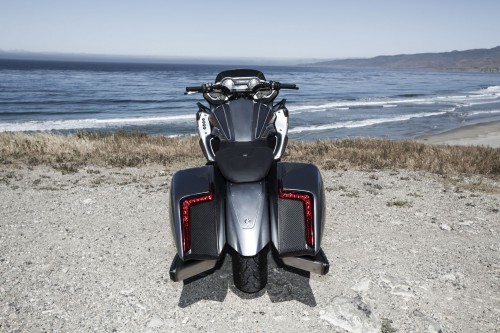 The name “Concept 101″ indicates the capacity of the concept bike, which has its roots in the USA. The capacity of the six cylinders is 1,649 cc – approximately equivalent to 101 cubic inches, which is the American unit of measurement for cylinder capacity. The number 101 also stands for the place where the vehicle came into being. It was not far from Highway 101, at the design studios of the BMW Group subsidiary Designworks in Newbury Park, California. “We had a clear vision when we were designing the bike: under the motto “The Spirit of the Open Road” we wanted to build a high-performance, emotional and highly exclusive 6-cylinder vehicle that would make every ride a special experience. 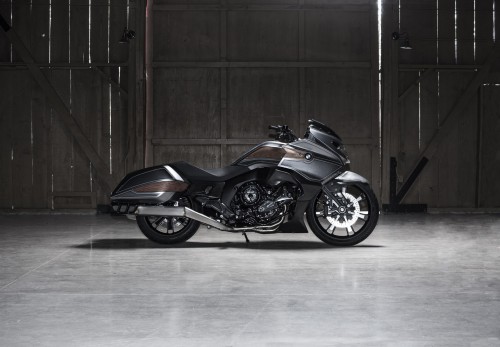 This vision is expressed in the BMW interpretation of a “bagger” – an exclusive type of custom bike especially popular in the USA. The very elongated and streamlined silhouette is especially striking from a distance. Unlike the low front section and the high rear of supersports motorcycles, the BMW Motorrad “Concept 101″ has a drop-shaped silhouette that is typical of baggers, reaching the highest point at the front trim. Below this, the large front wheel appears to pull the flat, stretched silhouette behind it. At the same time, the characteristic styling of the bike visually suggests a forward urge. Two side cases integrated in streamlined form add the final touch of a quintessential bagger. 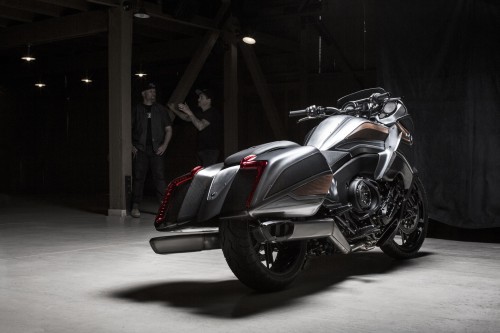 The dynamically designed front trim in brushed aluminium is flatly integrated into the flow of the styling. The integrated headlamp with striking double circular appearance gives the front section a distinct and highly expressive look. It also provides the point of departure for the characteristic split face which runs across the entire bike through to the rear in the form of a brushed aluminium trim section. Two striking side panels encase the front trim almost like a suit of armour, thereby creating a broad shoulder section which further highlights the power of the “Concept 101″. Tailpipes on both sides, each with three outlets, visualise the number of cylinders and therefore the supreme performance and high torque of the engine. They also ensure the appropriate sound, making the potential of the 6-cylinder engine audible. 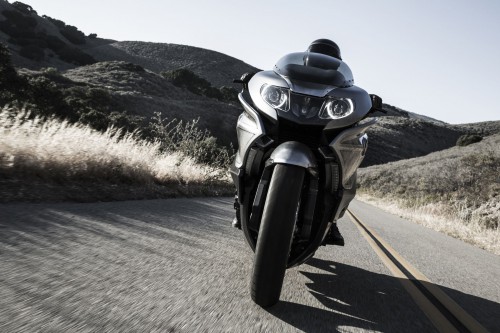 BMW, looking into the future

The rear view harmoniously rounds off the bike’s overall visual impression. A particular highlight is the unusual rear light cluster. It provides a frame for the dark-coloured rear section in the form of two LED bands. The design of the lights is formally reminiscent of former road cruisers. At the same time the expressive appearance grants a fascinating technical and aesthetic style.

The entire design of the “Concept 101″ right through to the colours and materials used reflects power, contemporary flair and exclusive appeal. The side trim parts and cases feature an elaborate two-colour finish: a light silver surrounds the surface while the inner section is a somewhat darker silver with more of a metallic effect. The two areas are separated by a line marking applied by hand. The paint finish also includes a shadow effect which gives the manually applied line marking greater depth towards the inside. The dynamic front trim adds a touch of cool, technical style with its unpainted, brushed aluminium. The aluminium’s modern, technological statement is supplemented in the bike’s lower section by means of generous carbon surfaces with a silky gloss. 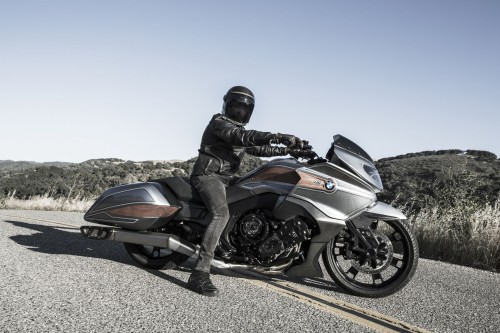 “The Spirit of the Open Road”

Amid silver paint surfaces, brushed aluminium and carbon, there are dark wood elements that add a warm, exclusive counterpoint. The elaborately milled wood, only treated with oil, emphasises the horizontal gesture of the side sections with its discreet grain. The model designation is integrated in the wood surfaces as an elaborate aluminium insert and badge. On the seat, two leather qualities further reflect the bike’s exclusive character: the fine-grain black leather of the side sections adds a touch of elegance to complement the perforated black leather of the seat area itself. A brown leather strip separates these two distinct sections.

The concept bike took concrete shape on the premises of Roland Sands. In close collaboration with the BMW Motorrad design team, Roland Sands assembled the exclusive parts of the “Concept 101″ at his own workshops. 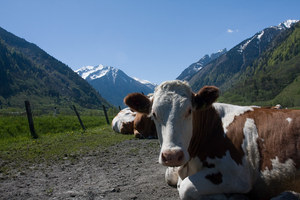