Image is everything when you’re 16. The Piaggio NRG 50 has race bike styling and graphics but it’s still a 50cc scooter. The sporty and practical scooter is available with two engines, the air-cooled DT and the liquid-cooled DD. The sportiest scooter of the Piaggio Group retails for 2.390,00€ in Germany. You get a relatively cheap and practical scooter with small wheels and alright-ish build quality. 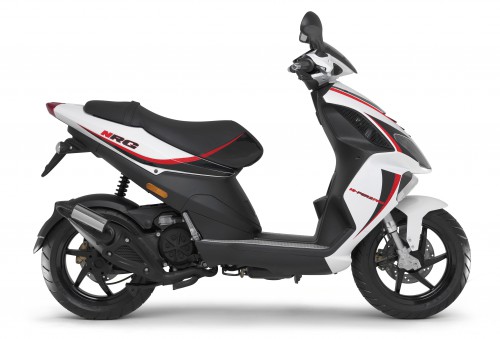 The NRG 50 is Piaggio’s sportiest small-displacement scooter since its introduction in 1994. For the new model year, Piaggio decided to update the scooter a bit.

The NRG 50 now features an even more aggressive look. The front shield has been redesigned to make it more aerodynamic. The shield holds headlamps with separate high and low beam reflectors. The shape of the headlamps and the central air intake give the NRG a markedly sporty look. The two-part shape of the lower shield strengthens this effect, with the direction indicators right under the headlamps on the sides.

The handlebar has a small, elegant front fairing to shield the instrument panel. The latter, made of semi-transparent material, has red background lighting and includes a complete set of analogue and digital instrumentation — analogue rev counter, LCD display with a speedometer, total and partial mileage, fuel level, radiator liquid temperature and clock. 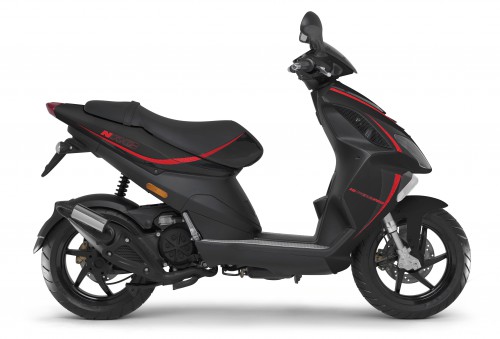 The indicators include fuel reserve, direction indicators, high beam, oil level and, in the PJ version, an injection check. Each version of the NRG has two rear view mirrors, a sport feature that also guarantees safer riding.

The large, flat footrest panel has a rough rather than a slick finish so that the rider’s feet are securely placed, a practical aspect that enhances everyday use. The upper part of the footrest panel holds an immediately visible, aircraft-style fuel tank cap that is easily accessed when refuelling. The comfortable, well-moulded seat gets slimmer and lower as it approaches the rear, with the tapered-off rear and LED rear lamp emphasising the sporty look. The NRG is the only 50cc scooter to be equipped with a LED lamp. The rear mudguard, a single element linked to the transmission crankcase, also highlights the NRG Power’s racy, aggressive look while protecting against sprays.

Under the elegant, racy design of the Piaggio NRG is some advanced technology. The twin frame cradle made entirely of high tensile steel tubes has a unique build to give it exceptional torsional rigidity and ability to handle sustained use. The result is extremely precise, safe riding. The new frame was structured to keep the vehicle centre low, slotting the fuel tank under the footrest panel. 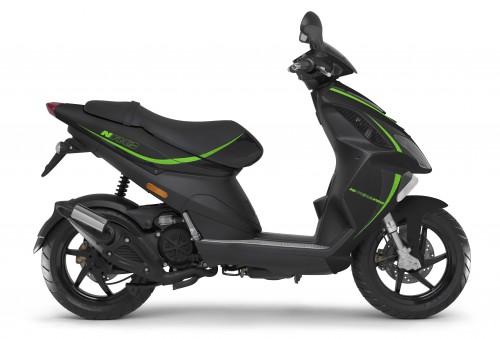 The 13”, six-spoke wheel rims in light alloy have a unique design and are both light and rigid to reduce the gyroscopic effect and make the scooter easier to handle without losing running stability. The rims hold good-sized sport-tread tyres, 120/70 in front and an extra-large 140/60 at the rear – the perfect size for optimal road grip on the deepest bends.

The brakes match the high level of the other components, with a 220m disk in front featuring a floating calliper with a single piston. This high-power brake with excellent modulation ensures reduced stopping distances and is backed up by a 175mm disk with a calliper and opposed pistons on the rear wheel. The DT version is the only one to use a 100mm drum brake at the rear, an excellent mix of performance and build simplicity.

The Piaggio NRG is available in two versions. The DD’sengine is liquid-cooled and has a carburettor while the DT’s engine is air-cooled. The NRG 50 DD also has a two-way catalytic converter to bring it well within strict Euro2 norms. The NRG 50 retails for 2.390,00€ in Germany. 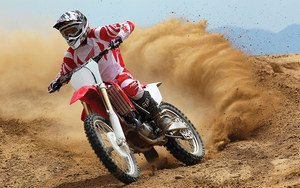