Honda and Yamaha are recalling sportsbike owners over a faulty Ohlins rear shock which could come apart during use. Since the Yamaha YZF-R1M barely hit the market, the recall only affects 350 owners while Yamaha has to notify all 2014/15 CBR1000RR owners. In total, 934 aftermarket Öhlins TTX series shocks are being recalled because the piston nut on some rear cushion shock absorders may not have been correctly tightened to specification when being manufactured.

“There is a risk that the rear shock absorber piston rod nut can loosen off due to insufficient tightening torque of the piston rod nut during assembly of some shock assemblies,” the recall notice says. “If the defect occurs this poses a potential accident hazard to the riders and other road users.”, continues.

“If the nut comes loose or comes off, the Rear Cushion shock absorber will lose its ability to damp the spring movement, which may affect the handling of the motorcycle. This poses an accident hazard to the rider and other road users,” the notice reads. 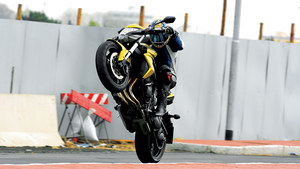