Even if it doesn’t make sense, we like seeing motorcycles using car engines. There are some examples that made it into serial prodution but most of these motorcycles are cool one-off customs that cought our eye. Here are five of the best car-engined motorcycles from the last 50 years that made the best fist of it. 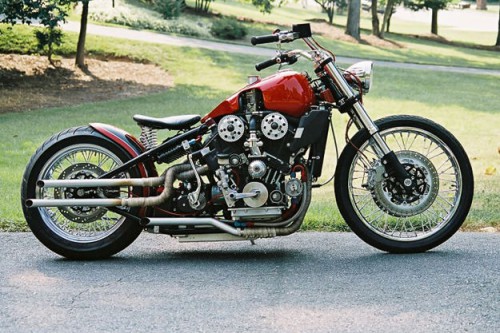 Crossbreed Cycles are based in the U.K. and created this interesting motorcycle a few years ago. All the work from design, finishing, fabrication is done by a single man, Chris Barber. The cycle parts consists of a 2.5 litre V6 engine, which was built by Alfa Romeo. The engine is mounted to a 4-speed Harley transmission and built into a Kraftek frame. Another features include six individual 4 ft exhaust pipes, a pair of downdraft Weber carburators, Kawasaki ZXR-750 front forks, discs and calipers, and cooling system with thermostatic switched fan on both oil cooler and water radiator. 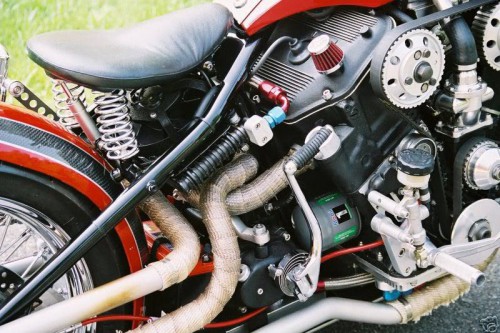 The engine is wet sump with an external Pace oilpump since it had to be moved outside the V6 to provide ground clearance. Ignition is dual/stacked BSA triple, running negative earth, with four twin post DYNA coils. 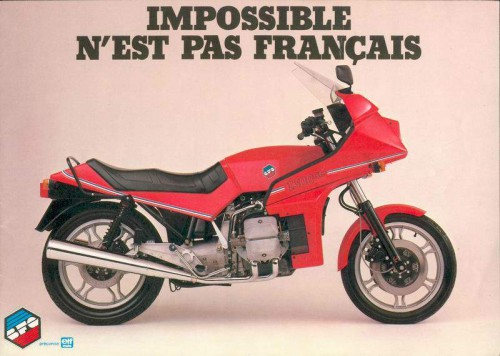 BFG is the abreviation from Louis Boccardo, Dominique Favarios and Therry Grange who made a concept for a motorcycle late in 1977. The strange thing about this motorcycle was that it used a car engine. From the very beginning, the bike was considered revolutionary and for that idea, the French engineers managed to squeeze a 1299cc Citroen engine into a motorcycle frame. They had to design a new five-speed gearbox and rear transmission with specific castings. The engine was re-fitted with new accessories, improving the look and the motorbike functionalities: new tappets covers in moulded alloy, traditional ignition and fuel pump were replaced by an electronic ignition and an electric fuel pump dipped into the fuel tank made in rotomoulded plastic. 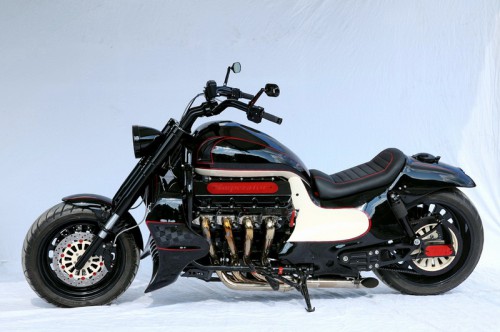 Click on the image for more Spec and Photos

Looking at the number of bikes built by Boss Hoss Cycles, the American company is presumably the most successful firm ever to build car-engined motorcycles. The company was founded by Monte Warne in 1990 in Dyersburg, Tennessee. They build high-performance motorcycles and trikes that use V8 Chevrolet engines. The current line includes 4,8 litre and 6,2 litre V8 engines buti t used to be an 8,2-litre as well. The smaller, 4,800cc engine puts out 295 hp at 4,800 rpm and an incredible torque of 305 ft.lbs at 4,800 rpm. The larger model is called BHC-3 LS445 and its 6,2-litre engine develops 445 hp and 445 ft.lbs. These bikes feature a long wheelbase (80” or 2,050 mm), 2-speed semi-auto transmission with a heel-toe shifter and a reverse gear, multi-port fuel injection, and a car tyre at the back. Claimed dry weight is 1,100 lbs.

As of 2006, Boss Hoss has sold over 4,000 vehicles. They also offer a number of accessories for their bikes and trikes. The products of Boss Hoss are most likely the best solution if you’re looking for a brand new car-engined motorcycle os trike. 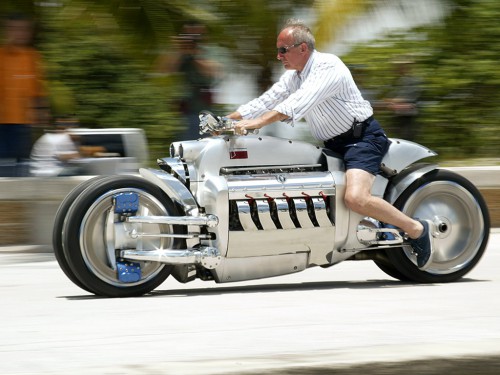 Click on the image for Tomahawk Spec and Photos

The Dodge Tomahawk is an exceptional custom bike that was introduced by Dodge at the 2003 North American International Auto Show in Detroit. Looking at the Tomahawk, you probably think that this vehicle can’t be street legal. Well, it isn’t but Dodge managed to sell nine hand-built bikes at a price of US$ 555,000. According to Dodge, these bikes were “rolling sculptures” not intended to be ridden. The company first claimed the Tomahawk can reach a top speed of 420 mph (680 km/h) but later revised this downward to 300 mph (480 km/h). The bike never demonstrated a speed above 100 mph (160 km/h). 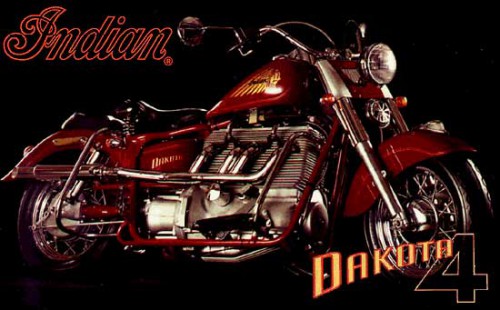 This Indian is in no way related to another reborn Indian motorcycle made in North Carolina. Since the original Indian maker disappeared in 1953, by mid-seventies, the name was in the public domain again. Scottish motorcycle enthusiast Alan Forbes registered the brand and used it in his efforts to keep original Indians going. But in the mid-nineties, Forbes met with Sture Torngren, editor of a hot-rod magazine in a Swedish cafe. Torngren arrived with a bike he had built himself, powered by his own straight-four engine. The result of this was an engine supply deal which led to the Dakota Four Wiking.

This new „version” of the Four was revealed in 2001 and it is powered by an air-cooled, 1845cc engine and a BMW gearbox. The four-cylinder engine has an output of 74 hp and 168 Nm (124 lb-ft). Many parts are purpose-built. Others, including camshaft, crank, pistons and conrods, come from Volvo; valves are from VW. The bike is still in production, the company builds five or six bikes a year. One of these will cost you, depending on specification, about £25,000.

Do you like Indian? See this Indian Motorcycles Men’s Warbonnet Hoodie 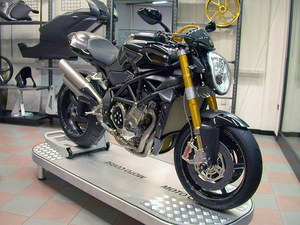