Derbi GPR stands out among the small sports bikes thanks to its unique features. Now the new 125cc 4-stroke engine is accompanied by the renewed 50cc version, dedicated to the youngest fans whose first approach to the biking world is the search for a state-of-the-art object. After completing its of 125cc engine range, Derbi is now enhancing its selection of bikes driven by the most technologically advanced and competitive engines of smaller sizes. 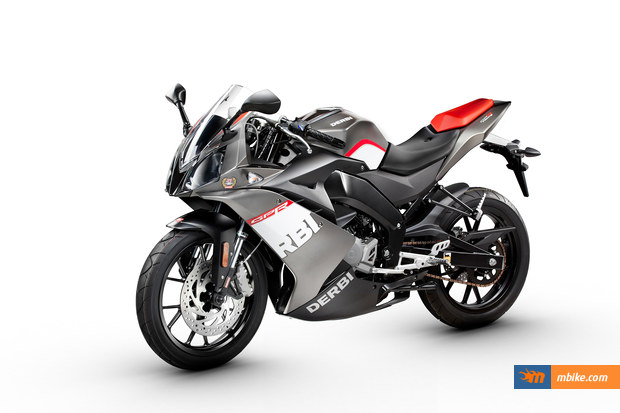 Directly derived from its elder sibling fitted with the 125 4-stroke engine, the new smaller model Derbi GPR 50cc 2 stroke boasts a series of features and merits that are really exceptional for bikes of this category: the dual beam chassis in die-cast aluminium offers great sturdiness, while at the same time maintaining the pure forms. The front suspension is also of an extremely high level, with its robust upside down 41mm fork with red anodised stanchion holders and a stroke of 110 mm, while at the rear there is an Ollé single shock absorber system directly fixed to the swingarm. The braking system is amazing: at the front a powerful 300 mm disc with four pistons and radial fixing, backed up by a 220 mm rear disc on the 125cc version, and a 218 mm one on the 50cc version (both with a single piston calliper). 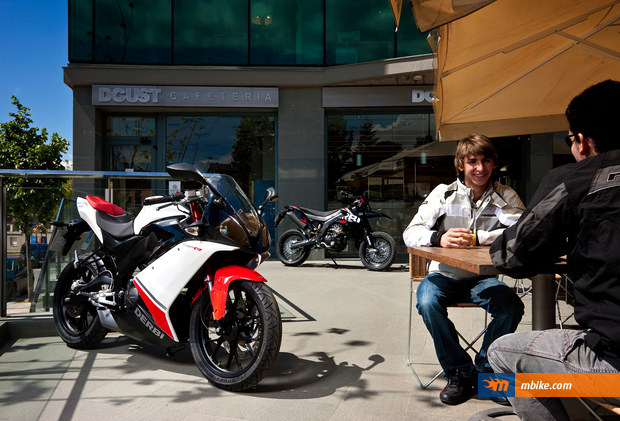 The 50cc single cylinder of the Piaggio Group is a liquid-cooled two-stroke characterised by reed intake. The lubrication uses a separate mixing system with a variable capacity volumetric pump. The 6-speed gearbox allows you to take the best advantage of the top engine performance levels.

This small but snappy engine, created for Derbi GPR, joins the powerful and well-known 125cc 4 stroke 4-valve single cylinder developed by Piaggio and Derbi: a state-of-the-art engine of the latest generation that’s already sparked a real revolution in this engine size category.