Paolo Berlusconi’s company, New Garelli were unable to reach an agreement with the trade unions, which means death to the historic italian marque. In their statement, New Garelli cites the company’s inability to reach a mutual agreement with the labor unions as it’s main reason for backing out of the deal. With no other buyers in the mix, and the trade unions seemingly an immovable object, Moto Morini seems destined for the dead pool. Find the company’s statement after the jump.

In connection with the negotiation for the acquisition of the bankrupt company Moto Morini, New Garelli SpA intends to clarify that:

The meeting convened by the Department for Productive Activities of the Province of Bologna, Graziano Prantoni, now scheduled for Monday, June 14 at the headquarters of the province itself, was canceled and postponed indefinitely. The communication, received by fax late on Thursday, June 10, pleading for the cancellation, reasons little understood.

The meeting of June 14, started as the previous update, which took place June 7 us, given the positive discussions and in that case, the events of mutual interest to develop a mutually agreed solution between New Garelli and Trade Unions and marginal points remained outstanding in the intentions of all, it would have been an opportunity to formalize and sign the final agreement. Of course the agreement with the Trade Unions, prior to the submission by New Garelli, a new financial proposal to the Bankruptcy Court, would become binding when accepted component of the proposal.

In light of this new obstacle and thus unable to forge an agreement with Trade Unions For unclear reasons, New Garelli feels obliged to put an end to this affair that may have connotations of a soap opera serials, if he saw – which unfortunately happens – and at home without work involved the workers of Moto Morini failure.

New Garelli has gained the decision after twice – the first in the arrangement and the second after the bankruptcy, on specific call councilor Graziano Prantoni to reconsider its position to exclude an interest after the failure itself – sought a solution to another Moto Morini, with proposals that would safeguard the preservation of historical company in Bologna, maintained the occupation of a large number of resources, incentives offered to those residual and invested significantly, and that nevertheless saw the defeat efforts that would allow recovery of the assets of the company in Bologna. 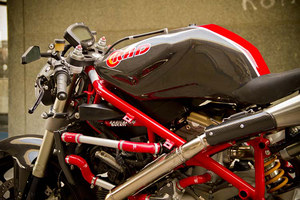