Here’s the first official photo of BMW’s new big touring machine, the K1600GTL, which features a straight-six engine, iDrive, adaptive headlights, full-color TFT display, traction control, ABS, LED taillights, angel eyes, an iPod-compatible stereo and huge standard panniers. At the heart of the bike will be a 1649cc engine which produces 160hp at 7,000 rpm and 129lb/ft at 5,000rpm. These first photo leaked just 10 days before the machine will be officially unveiled at Intermot show in Cologne.

BMW wanted to create the „Ultimate Driving Machine”, which is smooth and flexible. The key to that is the new engine which has plenty of torque at low revs – 90lb/ft at 1,500rpm. The engine features ride-by-wire throttle equipped with three modes: rain, road and dynamic. „Rain” decreases throttle response, „Road” is optimized for decent performance, while „Dynamic” sacrifices fuel economy for better acceleration. In keeping with the Bavarian convention, the K1600GTL’s aluminium frame will hold a paralever swingarm and duolever forks. The ESA II electronically adjustable suspension will be optional. The bike will have a full-color TFT display and an iDrive-like controller. The „multi-controller” allows the rider to scroll through menus by twisting, pushing and clicking. The new GTL will be a bit more expensive than the outgoing K1200LT which the GTL replaces. 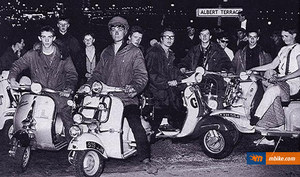