Ferrari and Ducati are tied together in more than one ways, so it doesn’t bother Ferrari that the motorcycle manufacturer gave him a Desmosedici RR with personaized paint job that’s a mix between the Ferrari and Ducati liveries. Alonso’s bike, numbered 1175 of an exclusive run of 1500 machines, was recently handed over to the former F1 champion. The spanish driver currently ranks fourth in 2010 Formula One World Championship standings, with 94 points. 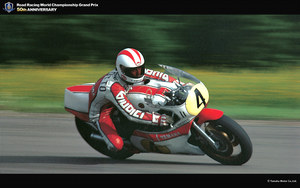