RSD and Geico teamed up to build a custom bike for the 75th anniversary of Sturgis. The guys at Roland Sands Design re-imagined the machine from the motor up as usual and the result is a stunning dirt tracker custom that started its career as a Chieftain. The bike is called Chief Racer and it is meant to trigger good feelings and launch dreams. Mission accomplished! 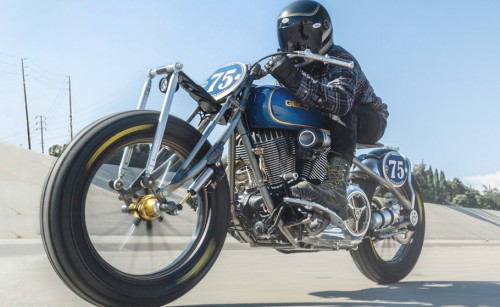 We’ve missed the debut of this custom bike since it was revealed a month ago but the newest creation of RSD is such a beauty that we have to show it to you anyway. The custom bike debuted on August 2nd at the Buffalo Chip at Sturgis. It’s hard to imagine but this bike was born as an Indian Chieftain. The guys pulled the motor and a few spare parts off the stock Indian Chieftan and re-imagined the machine from the ground up.

Nearly every part of the bike is designed, fabricated and machined by the RSD team to realize the Chief Racer. At the heart of the bike is the 111 cubic inch Indian V-Twin showcasing some new Indian speedparts. A completely one-off RSD chromoly chassis was constructed around the 111 cubic inch engine. RSD designed some prototype quick-change flat track wheels, coupled with a solo RSD brake caliper and Lloyd Brothers Motorsports / Johnny Lewis drilled, slotted & vented brake disc at the rear.

There’s a traditional but highly modified Kiwi Indian leaf fork controlled with a Fox Shox DHX shock. Seat was custom pressed by legendary skateboard maker Paul Schmitt of Schmitt Stix. RSD Prototype engine covers as well as era inspired floorboards round off some of the many details.

The best thing is, the Chief racer isn’t a show bike, it’s really inspired by racing and built to ride hard. We would love to see some footage of this custom beauty doing flat out. 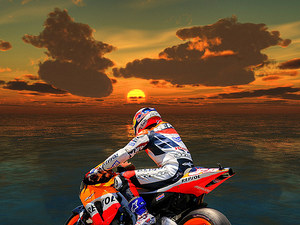