Reverend Ray Biddiss reached speeds of 114.1 mph on his Triumph Rocket III motorcycle hearse at Elvington Airfield in York yesterday. Claiming he reached the break neck speeds “on a wing and a prayer” on the one tonne 2.3 litre, three cylinder, three wheeled “Rocket”, Ray coursed two and a half miles under the watchful eye of officials who observed his record attempt. Witness statements, video footage, photography and speed trap beam breaking timed results which measure accuracy to within 1000th of a second will now be analysed by Guinness World Records over a three-day period, before Ray is announced an official record holder.

“I was thinking I could maybe do 105mph, but even on the practice run, it was 107mph and I was just feeling it out.” he said. „The Triumph Rocket engine is capable of 135 to 140 mph in a motorbike, but we have adapted it to carry a coffin. I have never taken it to that sort of speed. It was very stable. The only problem was the side wind, which was making it interesting at that speed.” he added. 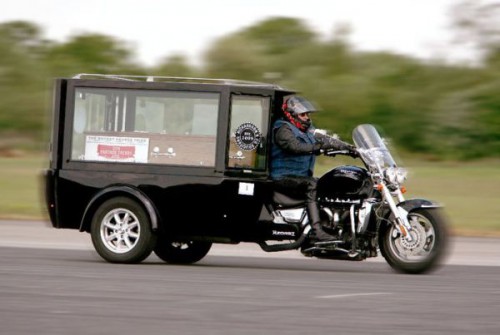 The reverend and his "Rocket" 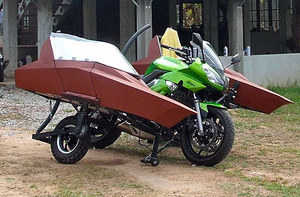