Bonham’s is getting ready for their first European auction of 2011, which will take place at the Grand Palais, Paris on February 5, 2011. One of the items is a very rear motorcycle. The Megola is powered by a 640cc five-cylinder engine built into the front wheel. As you can see on the picture, the motor rotates along with the wheel. There was no clutch or gearbox, though the torquey engine easily made light of its lack of a variable transmission and was capable of propelling the machine to a top speed of around 70mph. 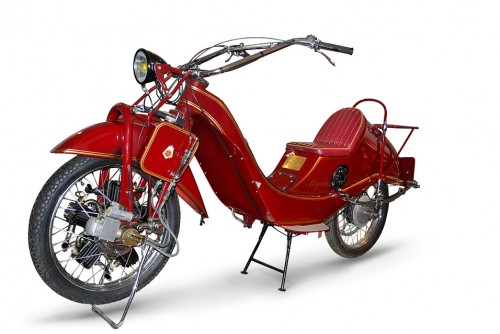 Described by Tragatsch as „probably the most unorthodox motorcycle ever made on a commercial basis”, the Megola was produced in Germany from 1921 to 1925. Designed by Fritz Cockerell, the Megola was started by pushing, or alternatively by rotating the wheel with the machine on its stand. The “frame” consisted of a box-like steel fabrication, welded and riveted together. Its front section contained the fuel, which was pumped to a header tank mounted on the right side of the leaf-sprung front fork. Touring and sports versions were made, the former having bucket seats, the latter saddles, while some models boasted leaf-sprung rear suspension. Despite its unlikely appearance the Megola performed well in competitions – there was even a works team – the racing version having a top speed of around 85mph. Only some 2,000-or-so Megolas were produced during the four years of production, and today the few survivors are highly prized by collectors. It is estimated to sell for €145,000-200,000.